That's What She Said

In case you haven't heard, this week has been a pile of loony shite! Last week ended quite nicely with the snowfall. I took some pleasant walks around the neighborhood. The ice and widespread power outages changed everything. Mine went out for about 24 hours, but there were a lot of Portland folks who were without for days longer. The electricity died at my job so the stock was heavily affected, and once we opened again we were slammed. Trees are down all over town, and because it's Portland the trees are huge so even if it's a fallen branch it's a big fat one.

I haven't a whole lot else to say except that I don't understand how I live alone and use an entire dinner service worth of crockery to feed myself over a couple of days.

I've been browsing Buzzfeed for just about everything: news, gossip, how-to's, etc. They have tons of "articles" that are really lists of products titled something like "30 Items You Didn't Know Would Make You Feel Like a Baller LOL" and a lot of these are for storage/sorting containers. I'm seriously anti-spending when it comes to organizing but I like glancing over the lists. Maybe it makes me feel superior? But I found this funny thing when I searched "organizing".

I've been reading Haruki Murakami's 1Q84. The length is intimidating (over 1100 pages) but I'm already over 400 pages in and while it's not an easy read it balances intensity with nonchalance, no wasted details. There's a particular passage that I just read where the spare language subtly deepens the weirdness. This novel, like everything else I've read by Murakami, defies any classification. A fucking plus.

Posted by Ean Eilsson at 4:02 PM No comments:

The Corn Dogs of the Ocean

Thursdays are my Fridays, so if you're reading this I've been moving between the sofa and the kitchen since I got home. I have an open container of salsa on my right and my sketchbook and phone to my left. I work in the grocery industry so I was on my feet all day today and most of yesterday. I talk about the weather at this job more than I ever thought I would, especially today because of the imminent snow storms. I have to repeat everything I say at least once because of the masks we all wear and the background noise in the store where I work. I like my job, but when my week is done I am so tired and haven't even realized it until I'm home. I just want to eat and scribble and watch TV.

I'm in the middle of watching The Haunting of Bly Manor on Netflix. It's a limited series that is a creative retelling of Henry James' classic 1898 novella The Turn of the Screw. The original work leaves a lot to the imagination, which is partly why it is such a great psychological thriller. The Netflix adaptation in particular gives more background to the characters. Mike Flanagan created this show as well as The Haunting of Hill House so it's going to be dark, dark, dark, and brilliant. He invited Henry Thomas back for another role in this program, which makes it extra special!

OK, so my latest exploit has been a lucky encounter on the Buy Nothing group page that I belong to on Facebook. Someone offered to collect used up batteries and light bulbs to donate to Ridwell for recycling, and as it happened I was collecting many, many of these for a future recycle plan that never happened. 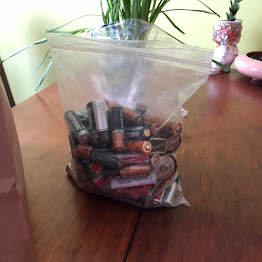 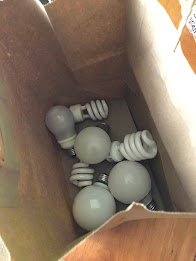 My understanding of how the Ridwell program works is that you subscribe to a monthly collection and they give you a box in which to place your items. I just had to bring my crap to the porch of the person I met via Facebook. No fees necessary!!!
I just wish I had taken before-and-after photos of the kitchen drawer where I kept the batteries for years. It was filled with all kinds of strange items. I cleared it out and organized it, but I wouldn't have if I hadn't had the opportunity to donate!
I'll leave you with a random thought I had this morning after I showed up for work: deep fried shrimp are the corndogs of the ocean. I had that thought as I walked down the frozen foods aisle. You're welcome.

Posted by Ean Eilsson at 9:36 PM No comments:

I now have a number of small containers that cost me nothing, which I use to hold a lot of the smaller things in the cupboards and fridge. Mostly they are berry baskets, either paper or plastic:


I'll have you know that styrofoam is the devil, but I found a few round little pieces at work that no one wanted and I'm using them to prop up my plants! You can't see them in this pic because they are underneath everything, making up for the uneven surface of the plant stand: 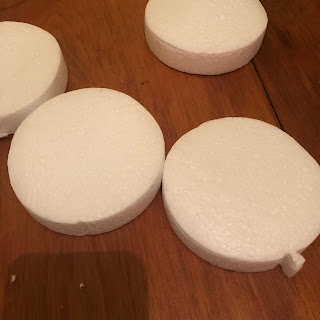 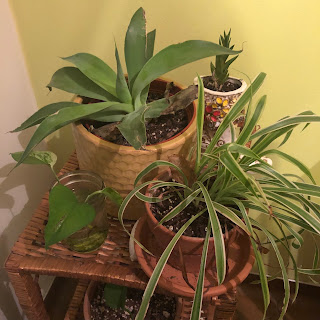 The Eagle Has Landed

Today gave us the perfect sunny window for a photo shoot with the new plant stand: 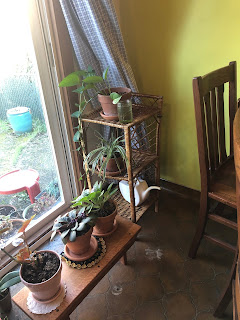 I started watching The Queen's Gambit on Netflix, after putting it off because it seemed to be mentioned everywhere. It's good! The word is that a lot of fans started getting chess sets to learn to play during the pandemic and that's fine. I played chess as a child quite a lot with my sister. The games would be about 10 minutes long on average because we were doing it all wrong. The set once belonged to my cousin and had these really cool stone pieces. The hinge was broken on the box and I replaced it with one that was too small but I was proud because I was nine and fixed something myself.
Posted by Ean Eilsson at 12:35 PM No comments:

If you've known me for some time, then you know I have a lot of sweet hookups for getting free stuff for my house. This is a blog segment I'll call The Free Box even though things aren't always in a box when I find them. Like this great plant stand: 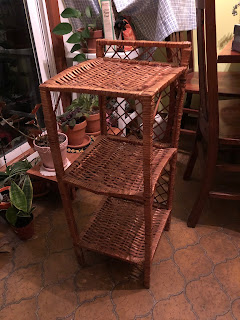 I was walking with a friend on the way back from SE Division and someone had left a few items, mostly wicker furniture, just off the curb behind a pickup. A guy came out of the house nearby and told us we could take what we wanted!
People are really generous about giving things away on the sidewalks in front of their homes here in Portland. This past year I've come across a wire basket for my garden tools, a bucket with a spout complete with a newish scrub brush, books from Philip Pullman's His Dark Materials series (that I happened to want to read very much just then), a bottle of high-end maple syrup, and a milk-glass IKEA table lamp. I almost forgot: a black and chartreuse Adidas backpack, clean and in excellent shape except for a small zipper that didn't work. I once found a vintage metal dollhouse in Laurelhurst but it wouldn't fit in my bike basket so I had to leave it behind. I try to only take things that are going to be really useful.
It's no secret that people got wild cleaning out their hovels during quarantine and I was no exception!
I forgot to mention in my last post that I've been making my bed every day this year so far. This is a boring detail, but I got the idea from a YouTube workout video. The person doing all the exercise had to make her bed each day as part of the routine to help change her mindset. It's not a bad concept!
Ok, enough practical jibber jabber for now. I've been watching some K-dramas and one of them is It's Okay to Not Be Okay:
It's great, but I'll be honest: I'm not rooting for their relationship yet. I think their chemistry is getting better and I like all of the characters as individuals, but I enjoy the parts with the main guy and his brother and best friend most. The slow burn in K-dramas is more intense and drawn-out than I'm used to, so I have hope for this entanglement. Plus, the episodes are LOOONNNG and there are 16 episodes, so there's a long way to go.
Posted by Ean Eilsson at 8:10 PM No comments:

It looks like I did only a little work on the kitchen today but I made more progress than it looks like: 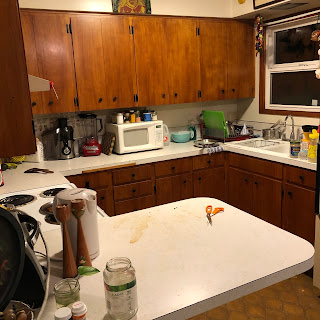 Well, now that I've seen both pics side by side I have to give more credit. Not shown: I organized three cupboards and consolidated some things into containers that had been standing mostly empty.
Here's a hack I never thought of until today: I always have had trouble storing long taper candles and keeping them safe from breaking or bending. Today I put them in some tall unused flower vases, and they'll be upright until they're ready to use.
Also not shown: I took out the trash, recycling and compost. I had a few little pumpkins on my porch as decoration so I threw those in the big green bin out front as well.
I've been a member of The People's Yoga for a few months since they began a sliding scale monthly fee, so I've been livestreaming classes for a while. They have recorded classes too that are accessible with a membership. When I had to quarantine last spring for a couple weeks I treated myself to yoga blocks and a strap which are pretty indispensable, and now I even have a bolster. Don't be fooled, I'm not very good but I'm trying and it's helped a lot these last few months. I took a vinyasa class today where the instructor spends a portion of time doing the wild handstands and backbends, and I just did some basic stretches while that's all going on.
One thing I'm kind of excited about is Harry Styles and this new-ish song. I didn't want to like him but now I can't stop thinking about how great this is:
Ok then - I'll be back in touch in a couple days. Wear your mask, don't be a jerk!

It's January 2021 and high time for a little Seasonal Affective Disorder to reign. Symptoms: lack of energy and focus, loss of desire to participate in recreational activities (other than TV), general disorder of the environment. These, at least, are what I'm experiencing lately.

I'm turning to my old blog to help me record some before-and-afters of projects, as well as an outlet for occasional depression that happens around this time of year. The onset usually hits right before the holiday season.

OK, that being said, here's a before pic of my crappy kitchen! 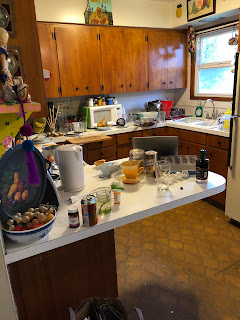 Don't be afraid. I've already done some work and it is a lot better.

I prefer it in Japanese with English subtitles. It's about a guy who's trying to find the sorcerer who changed his head into a lizard's! His friend Nikaido runs a café and makes lots of gyoza in between hand-to-hand combat with freaks and magicians. Lots of necromancy in a mafia-style underworld, with occasional zombie attacks and excellent homestyle dining sequences. I never found cartoon food appetizing before this! Even the opening and closing credits are fun to watch, and the soundtrack is killer.

I'll try to get back to you all tomorrow with some updates. Until then I'll just get through this minute by minute.

Posted by Ean Eilsson at 6:51 PM No comments: